Mr. Dickens: He Knew How to Keep Christmas Well 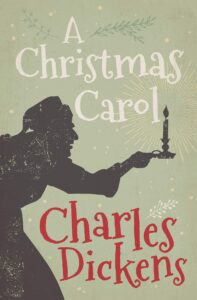 With the Season upon us and books in my heart, I am encouraging families to read favorite stories aloud together at Christmas and to make this a holiday tradition.

A “keeper” in my personal library and one well worth rereading is A Christmas Carol by Charles Dickens.  We all know the story.  There are well over 100 film adaptations, with Ebenezer Scrooge portrayed by Alastair Sim, Mr. Magoo, Albert Finney, George C. Scott, Bill Murray, Yosemite Sam and a host of others.  I suspect it is the rare individual who hasn’t seen at least one.  Many of these movies are marvelous, but reading Dickens’ words reveals a depth that film can never capture.  This one-of-a-kind story, published in 1843, has endured for a reason—Dickens’ storytelling, marvelous and magnetic, poignant and profound.  He draws us in from the very start in his preface:

“I have endeavored in this Ghostly little book, to raise the Ghost of an idea, which shall not put my readers out of humour with themselves, with each other, with the season, or with me.  May it haunt their house pleasantly, and no one wish to lay it.  Your faithful Friend and Servant, C.D.”

Mr. Dickens describes Ebenezer as:
“ . . . a tight-fisted hand at the grindstone, Scrooge!  A squeezing, wrenching, grasping, scraping, clutching, covetous old sinner!  Hard and sharp as flint, from which no steel had ever struck out generous fire; secret, and self-contained, and solitary as an oyster. . . External heat and cold had little influence on Scrooge.  No warmth could warm, no wintery weather chill him.  No wind that blew was bitterer than he, no falling snow was more intent upon its purpose, no pelting rain less open to entreaty.  Foul weather didn’t know where to have him.  The heaviest rain, and snow, and hail, and sleet, could boast of the advantage over him in only one respect.  They often came down handsomely, and Scrooge never did.”

You won’t find that in a movie.

Charles Dickens has entertained tens of millions of readers for nearly two centuries, but he wrote not just to entertain.  He wrote to expose many of the ills of society . . . and to move readers to act. Dickens was an advocate of reform.  Novelist William Thackeray called A Christmas Carol “a national benefit, and to every man and woman who reads it a personal kindness.” Well said.

When Dickens signed his preface “Your faithful Friend and Servant” he was not just using this as an exit line.  Dickens meant it.  He had a desire to serve, which he did through the power of his words.  In addition to his writing, he was well known as a philanthropist, frequently expressing his views at public meetings and using some of his public readings as fund raisers for social causes.  Charles Dickens was truly a “faithful Friend” of his fellow man.

There’s nothing like reading books aloud together.  Sharing this classic as a family is bonding and delightful, but it can also inspire conversations that make us better people.  A fitting way to observe Christmas.

At the end of his timeless story, Mr. Dickens says of Ebenezer:
“ . . . it was always said of him, that he knew how to keep Christmas well . . . May that be truly said of us, and all of us!  And so as Tiny Tim observed, God Bless Us, Every One!”

More favorites for the Season:

The Best Christmas Pageant Ever by Barbara Robinson

Christmas Gif’: An Anthology of Christmas Poems, Songs, and Stories written by and about African Americans compiled by Charlemae Hill Rollins, illustrated by Ashley Bryan

Hershel and the Hanukkah Goblins by Eric Kimmel, illustrated by Trina Schart Hyman

Vaunda Micheaux Nelson is an American writer known for her fiction and nonfiction books for children and young adults. The former youth services librarian lives in New Mexico with her husband, Drew. Learn more HERE.

Want to have Vaunda speak to your school or organization? Click HERE to book her today!