June 19th, 1865, began as another hot day in Texas. Enslaved African Americans were busy working in the fields and homes of the people who owned them when a message arrived in Galveston.  The message raced from ear to ear through town. It was carried to the countryside by riders on horseback, by wagon drivers and by people on foot.  The people on foot were running because the message was so important.  It changed their lives forever.  Union General Gordon Granger had arrived in Galveston and read an order from the President.  Abraham Lincoln had signed the Emancipation Proclamation two years earlier, and the Civil War had ended in April, but enslaved people in Texas were last in the nation to get the good news —they were free!

The moment brought great joy and, since that June day, the folks in Texas have celebrated every year.  This event came to be called Juneteenth.

The 13th Amendment (1865) officially ended slavery in the entire nation, but the Emancipation Proclamation (1863) marked something significant—a turning point in our country in which our government made a binding commitment to honor its founding promise of equality for all.

Rather than debate how well this promise has been kept, for now, in the spirit of my resolution to accentuate the positive, I encourage readers to rejoice in Juneteenth, which has been declared an official holiday in nearly every state and, hopefully, will soon be observed nationally.

Let’s celebrate freedom and strive to love one another. 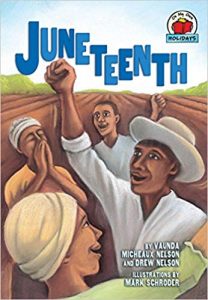 A new edition of Juneteenth, updated for today’s readers, was released earlier this year by Millbrook Press (Lerner Publishing Group).